I think it’s the only time I will be able to say,

Oh France? Yeah, it was a last-minute decision. 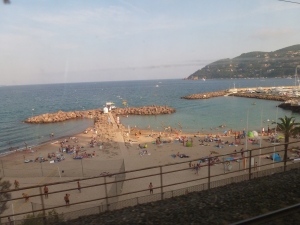 And it was. Jesse, one of Sandeep’s friends, had recently spent a weekend in Nice and spoke fondly of the beaches and sights in Côte d’Azur. From her description and the location, the southern coast of France seemed like a perfect place to visit before heading east into Italy for cobblestone streets, pizza and espresso. Booking a train and a hostel online the night before however, proved to be seemingly impossible but after some hair pulling and a very expensive 1st class ticket, I was headed to Nice.

I spent the majority of the train ride watching the landscape blur past my window. The rusty-red soil in France quickly replaced the fertile Swiss ground and trees withering under the coastal sun seemed seasons away from the cool and windy Alps just hours before. As we passed Marsailles, I spotted large white yachts floating in the ocean and sunbathers scattered along the shore. It was then that I realized the challenge of my first solo city adventure, a place many diehard backpackers try their hardest to avoid—high season.

I arrived in Nice, tired and slightly disoriented. The streets, tourists, and general buzz outside the train station had none of the reserved order of Geneva’s downtown. I walked past restaurants boasting a variety of cuisines in bright neon lights and jostled my backpack between the crowds of couples, families and travelers on the sidewalk. A flurry of young travelers filled the hostel with laughter and bottles of beer as I checked in. I hurriedly dropped off my bag and found my way to the ocean, illuminated by lights from restaurants, casinos and freshly lit cigarettes. High-rise apartments and hotels stretched as far as I could see while a bloated orange moon floated slowly above the din. Does can a person feel so lonely in a crowd of people?

I sat on a bench and watched Nice pass by: shirtless joggers, women in high heels and miniskirts, families and groups of college-aged friends. The challenge of navigating this new city seemed suddenly quite overwhelming and I watched the moon rising, wondering what I was doing on a trip to Europe so utterly alone.

I returned to my room to find the five empty beds occupied with a group of young college students traveling from Taiwan. The organizer of the trip described their travels and showed me his scrapbook filled with cutout maps and miniature drawing. One girl joined the conversation to fill in place names and smiles in halting English while the other girl offered me orange slices as we sat in a circle on the floor. The young man had traveled about a month by himself before meeting up with his friends and I asked him if he ever got lonely on the road. “Sometimes,” he admit, “but when you are alone you can…go deeper in the culture and in yourself.”

His words couldn’t have been more true or come at a better time.