Tomorrow I will begin Week #4 in the Philippines. As my host dad likes to exclaim, “Holy Cow!”

I arrived back in Manila last night, exhausted and honored to be part of the first ever Road Revolution. There is nothing like seeing a multi-lane road, usually congested with air pollution and traffic, filled with longboarders, families biking and runners streaming past in flocks. I was amazed by the turnout and support of the thousands of petition signers and various organizations. And here I am at Week 4. The last time I arrived in Manila airport was a Tuesday in May, time zones away from the US, I thought as I munched dried mango slices on my way to the airport. What do they say about time flying?

But the theme about time moving and catching up with us doesn’t just apply to my trip to Cebu. It also applied to my father and his recent discovery of an old acquaintance. That is the way it is with parents. Moments before you label your father’s travel stories as crazy and far-fetched, something happens that forces you to reconsider.

When my father traveled to Cebu as a young man, he met a man named Stu Gould. Stu was a diver like my father and the two of them enjoyed many fond memories on the beaches of the Philippines. When I told my parents I would be spending a week in Cebu, he googled “Stu Gould” and e-mailed a man with the same name, who currently owned a resort in a similar place to where they had met. My father wrote about the Stu he knew, how he collected tropical fish, was an ex British Diver and had (at the time) been living in Cebu for a short while.

“We lived in a small cabin on the water, dove a lot, almost lost a young British Diver and had to ship him up to Subic for decompression and took a ride down to Mindano to look at a gold mine.” my father wrote. “If this the Stu Gould, how the heck are you.”

Was this new Stu Gould, the mystery man of the past? I was skeptical at best. My father would probably see my eyes rolling from across the ocean. That was years ago. It’s impossible. I’ll be believe it when I see it.

And I did see it, in the form of a response e-mail the same day:

“Hi Ken! Long time no hear! Yes it is I Stu Gould,” it read followed by a nice description of the last 30+ years detailing Stu’s return to the UK, birth of his 4 kids, and decision to build and run the Granada Beach Resort now 100 km south of Cebu. He personally invited me to take dive lessons and spend time at the resort during my travels throughout the Philippines. Go figure.

Lesson: The next time your father tells you he may have recovered a long lost British diving friend from the small island of Cebu in the Philippine archipelago, just believe it. He’s probably telling the truth. 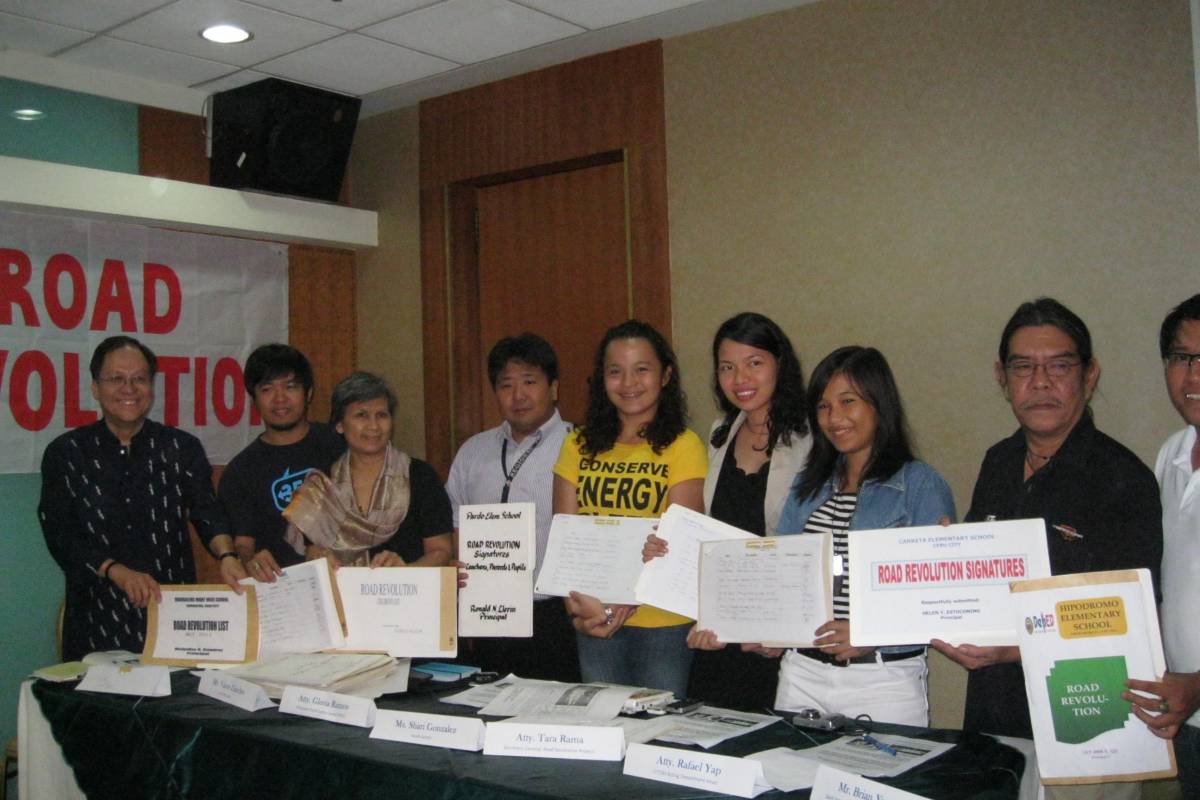 Cebu City is located a little over an hour south of Manila by plane. As soon as we landed, I checked into my room and rushed with Atty. Oposa to the press conference. Different members from TV and radio stations were present, weaving between one another in the small room of the Casino Espanol. On the panel was Atty. Oposa who gave the main presentation followed by members of 350.org, youth leaders, and other main organizers of the event. I sat in the back and smiled, hoping no one would try to ask me something in Cebuano.

The rest of the day was packed. We made our first stop along Osmena Boulevard, the street that would be closed down on Sunday June 12th. Next, we traveled to a trade school and saw the making of the Renewable Energy train (RE Train) that runs exclusively on petal, solar and wind power. We spoke on air at three different radio programs to explain the Road Revolution and encourage citizens of Cebu City to come support the cause. On the last program, an FM station, I was able to introduce and explain the event in English…the only language I know. I got back to my room around 10pm, throughly exhausted and content with the day’s work.

It is amazing how quickly the people here switch between their native language and English to communicate. The language spoken in Manila by the general public and my host family is not the same language spoken here in Cebu. People in Manila speak the national language, Tagolog, while the people in Cebu speak Cebuano- a variety of Basaya the language in the middle region of the Philippines. The majority of the vocabulary is different and I had to re learn basic phrases like “How are you?” and “Good night.” By relearn, I mean promptly forget spelling and pronunciation as soon as they are uttered. I have yet to understand why Filipinos would decide to start words with ng. Don’t try to pronounce this at home, folks. Words like ngit ngit (dark) are strictly meant to be said by professionals.

The next day included another radio interview, a marriage proposal from a father whose son is a single doctor in Ohio, visits to three different grade schools, and my first ever jeepney ride. All in a day’s work. In two days, I have not only learned about what the Road Revolution is but explained it to small children, adults, and teachers all across Cebu City. It got me thinking. What are the future implication of this Road Revolution? We have collected over 6,500 signatures in effort to expand sidewalks, increase bike lanes, and introduce mass public transportation along with edible gardens. I’m amazed by the progressiveness of the idea, prevalent in a “developing country” no less. I’m surrounded by people with big ideas and deep convictions people dedicated to protecting and restoring our natural environmental in order to save humanity from itself. I just hope I can somehow prove myself amidst this group of intelligent, dedication stewards of our beautiful planet. One road at a time.

Just as I was getting used to my new relaxed life in the Philippines, I was reminded of the real reason I spent a total of 17 hours in the air to fly half way across the world. No it was not their delicious desserts and ability to purchase rice at McDonald’s. It was the chance to intern at the Law of Nature Foundation and learn more about environmental law than I could have dreamed possible.

The office is located in Alabang, about an hour and 15 minutes south of Marikina City, sometimes more, with the infamous Filipino traffic. At most, the small two-room space on the 6th floor of the Westgate building consists of three people: the secretary Lisa, the young multitasking genius Vivienne, and the founder of the organization, Atty. Tony Oposa. While the office doesn’t seem impressive, don’t be fooled. Projects include: a sailing and environmental eduction school in Bantayan Island, one of the top vacation spots in the Philippines, a Road Revolution in Cebu city, a Global Action on Climate Change, ongoing legal battles, presentations to the Senate, and coral restoration all occurring at the same time.

It’s a lot to take in. Especially on a first day. Anna Oposa, Atty’s daughter, is extremely active in the organization too. She spoke at the Senate hearing on the illegal exportation of black sea corals and was quoted extensively on the front page of Philippines Daily Inquirer. By the end of my first week, I had already visited the Senate to speak with senators about the illegal black sea coral exports and met a director about a new bill. I received a personal invitation to the house of the Filipino president, a flight to Cebu to meet the masterminds behind the Road Revolution, and solidified plans to spend an entire month on Bantayan Island researching environmental economics for Oposa’s upcoming book.

I need a nap. But check out the Road Revolution. A petition is being signed to change Osmeña Boulevard, a major street in Cebu City, into a street focused on people. The proposed road will allocate 30% for sidewalks, 30% for bike lanes, 30% traffic, and 10% for edible gardens. It’s a mind revolution in the truest sense of the world. You can also read about it by blog and like it on Facebook!!