Nick’s travel website is almost live. He’s patiently waited for me to finish editing the first round of pieces for the Katelyn “stamp of approval.” I believe all forms of the website and various social media outlets should be ready in the coming week. Stay tuned…

Over the previous month, I’d had many conversations about travel. Lorenzo, the Italian stud, is jetting off to Greece to sail a boat with his friends for two weeks. John & his fiancee are planning an 8 month backpacking voyage through Southeast Asia after their wedding in October. There are bachelor parties in NOLA and romantic adventures to California. It seems everyone is coming and going to exciting new places.

While playing in the waves on the Jersey Shore, Brian asked me if I had any trips planned. What was up next on the bucket list? Anything more immediate than quitting (again) for a trip through Asia? I was embarrassed to tell him…no. During my summer weekends I’ve escaped the oppressive city heat for Lake George or Connecticut but nothing big was planned on the horizon. No PTO scheduled, not since New Orleans. Brian and I both seemed lost in the schedule of our own little lives and it wasn’t until the ferry home that I heard my father’s voice entering my brain.

Always have your next trip in mind.

How had I forgotten this essential Tsukada rule? The next trip is as reliable as the horizon. And like the horizon, those distant mountains or island speck may be far away, but the goal is visible and the path is clear. The question is a matter of “when” not “if” thereby making the next great adventure all the more attainable. There is a defined reason to save up pennies and research new attractions. It is this knowledge of the Next Trip and accompanying opportunity to leave a routine that is the most enticing feeling I know. 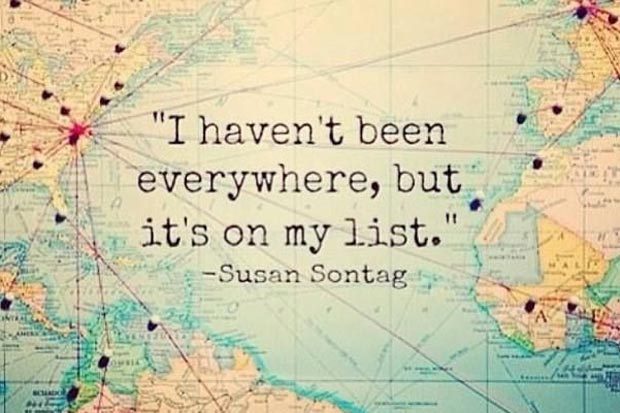 And so Boyfriend Billy and I going to Nashville, Tennessee.

The reasons are fairly straight forward. It’s closer than the west coast in an area of the country we’ve never seen. There is a culture of Southern hospitality, authentic music and good food. In recent years, Nashville has exploded in a flurry of hipster coffee, restaurants and have yet to raise their prices to those of other major tourist destinations. With a round trip ticket for under $300, Nashville seemed like the perfect place for the Next Trip.

My Inbox is bulging with airline and hotel reservations, to-do lists and recommendations from friends. We’ll each be taking three (yes three!) days off of work to maximize time away from the grinding 9-6pm. All of a sudden, I looked up from the sidewalk and realized that the horizon was a whole lot closer than I’d originally thought. September 23rd will be here before I know it.

So do it, friend. And I don’t mean buy an airplane ticket or quit your job. I mean, pick a place where you’d like to go and make sure it’s clearly embedded in your mind’s horizon. Because you may not know when you’ll get there, but someday has to come around eventually.