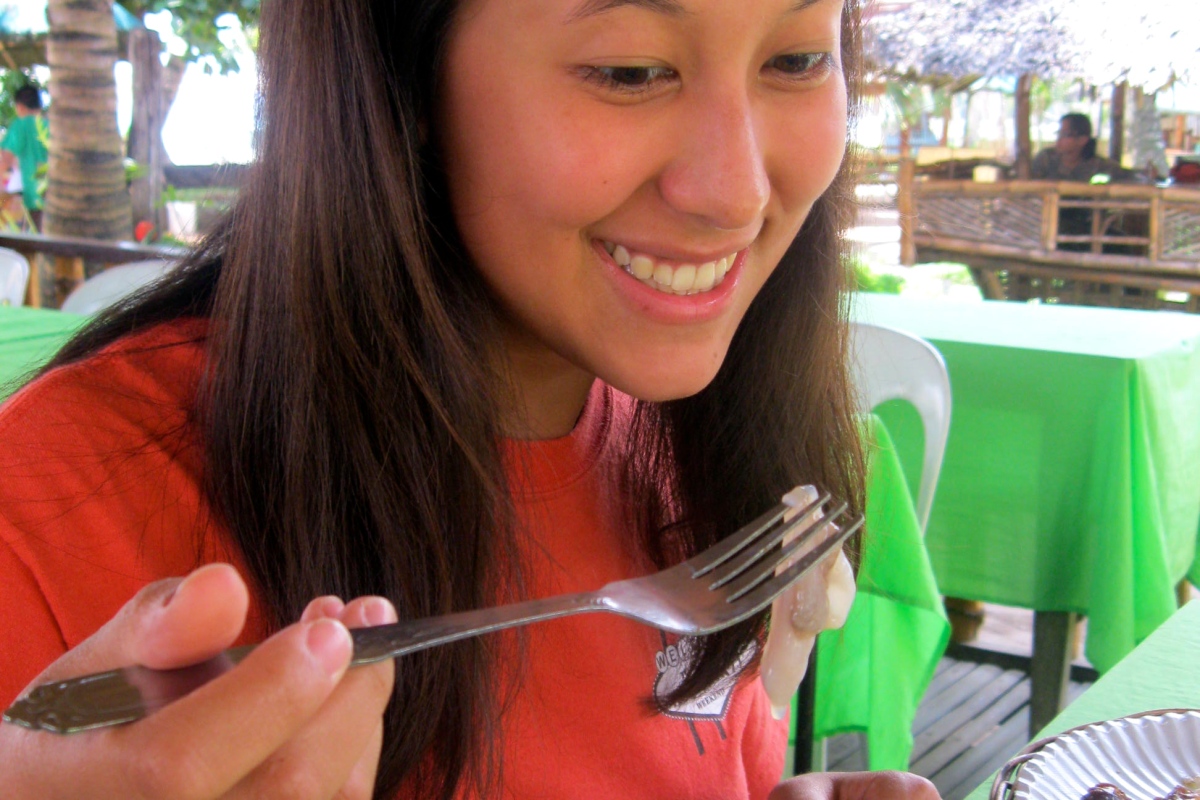 I’m not a picky eater. There are foods I don’t particularly enjoy and I remember as a small girl, squishing the lima beans into my plate to avoid eating the mountain of light green mush. But I’ll always try something once. This quality was tested multiple times starting about a week ago with a favorite Filipino delicacy which also happened to reach Number 1 on The 6 Most Terrifying Foods in the World. I’ll give you a couple seconds to google it…

Balut (blog on how it’s cooked) is a fertilized duck egg that is hardboiled and eaten, usually with vinegar/chili sauce. It is sold at night by street vendors because no one wants to see the baby duck before it’s ingested. I don’t blame them. But I’d been in the country almost 8 weeks, looked more tan than some of my friends, and said Magandang umaga po to my driver every morning. There was only one food between me and my newly-hatched Filipina self. My friend ordered two eggs and, with more than a slight nudge, I cracked the egg on the table and began to peel away at the shell. I squeezed some vinegar into the opening and following my friend’s lead, I tilted my heads back and sipped the juice.

I peeled away more of the shell and took a big bite. I was lucky (lucky as someone can be) since my egg was only about 15 or 16 days old so the feathers and beak were not fully formed. The taste was strong but not terrible. It was concentrated taste of poultry and egg squished into one. Unfortunately, I took another bite and got the white part of the egg that is referred to as the “stone.” It’s hard, very hard, like eating plastic cartilage. That would be my second and last mouthful.

Fast forward to an overnight with Viv and her friends from high school. On our way to our destination near Antipolo we stopped in a restaurant known for beautiful artwork and exotic food. Since no one wanted to buy we painting, we ordered crickets. Not as gross as they sound. Small, friend and crispy, “just like eating popcorn.” Later in the day we returned to town to buy chicken intestines coiled on thin wooden sticks and BBQ’ed. Also not my favorite but people were buying them in sets of 10 or 20.

And finally Puerto Princesa, Palawan for the last dish. This delicacy snuck up on me after I had finished my buffet lunch and was basking in the beautiful ocean view. Nadine, my tour guide for the time, told me a woman was selling tamilok and I had to try some.  “What is it?” I asked. “Wood worms,” she replied and smiled. “They grow inside mangrove trees.”

Well once someone eats a duck fetus everything else is pretty much fair game. The worms were about 2 to 3 inches long and seemed to be boiled in their own juices. I dipped one in calamancie(like key limes) juice with chilis and popped it in my mouth. It was chewy and slimy but had very little flavor. Nadine said she thought they tasted like oysters but I don’t know if I agree. Anyway, I ate 3 or 4 before calling it quits.

And here is the surprising part, I feel great. Granted, none of these foods I would order off a menu or ask my mom to cook but everything was close enough to food that I could handle the look, smell and taste. For short periods of time.

Cause it’s about to get crazy”