The first day of my internship with LNF, Atty. Oposa informed me that I needed to learn how to SCUBA dive. ASAP. There are local fishing villages, he said, who upon seeing the coral reefs and marine life below the surface of the water realized the tragedy of devastation caused by dynamic and cyanide fishing. Scuba diving would be my way to see the environment I would be fighting to protect.

So I contacted Stu (see earlier post) and weeks later I arrived in Granada near Boljoon on the island of Cebu. Their property consists of their main house and the resort–a beautiful property built on a mountain with steps down to the resort pool, other buildings, and the beach front. I arrived at night and in the darkness I could just barely make out the mountains and the sea. 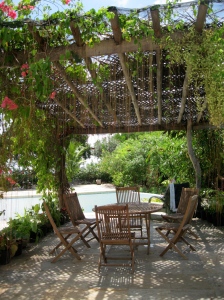 In the morning, I opened my eyes and thought I had gone to warm, tropical heaven. The windows in my room opened out onto rolling green hills with palm trees, song birds and pink flowers. I walked downstairs, through the open living room and kitchen to the veranda for breakfast. The giant papayas were picked from the trees along the house and the taste was sweet and delicious.

I jumped into my swimsuit and grabbed my mask before making my way down to the resort’s pool for my first diving lesson. Down and to my left was the ocean, eggshell blue melting into navy and sparkling in the morning light. I stopped multiple times to gaze through the tree branches toward the islands dotting the near horizon. Small fishing boats moved through the water and men with wide brimmed hats paddled or motored with the hopes of the day’s catch. This is where I will learn to dive, I thought. Life could be worse. 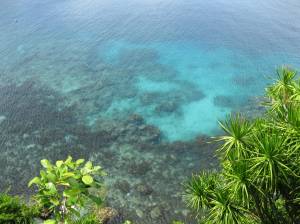 I spent almost two hours that morning learning the basics of diving. I tried on the bulky equipment and practiced breathing underwater with the regulator, BDC and tank. I felt like a fish–a big, unbalanced, awkward fish–and clearing my mask took a number of times before I felt comfortable removing my mask and clearing it using air from my nose. I listened to Stu’s instructions and tried to replicate them as my mind wandered to the memories my father had of diving with Stu long ago. I was swimming in my father’s wake with the same man by my side. 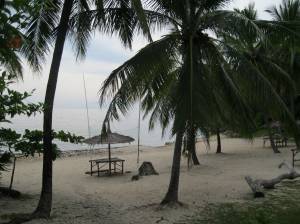 Hours later, after lunch and a cup of coffee, Stu and I were floating in the sea with our gear on ready to go for a dive. A real dive for the first time ever. I put the regulator in my mouth and took a few breaths. Don’t freak out, I told myself, What’s so scary about breathing under 30 feet of water for 45 minutes? Stu gave me the OK sign and we began to let the air out of our BCD’s, sinking slowly beneath the surface. I kicked my fins behind me and told myself to breathe.

Sea life appeared beneath my body and in front of my mask almost instantly. Black and white stripped fish danced between hard pink coral branches and long blue arms of sea stars hung onto the rock walls. I left like Alice falling into Wonderland and Neil Armstrong exploring the moon. There were creatures I had never seen before, organisms I could not create in my mind and there they were, living life as they had for generations. It was a sight to behold.

2 thoughts on “Cheshire Cat in Space”