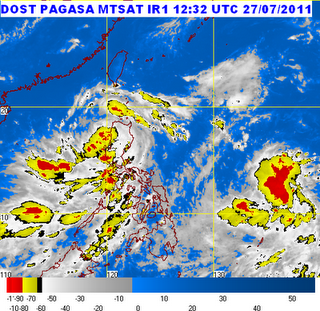 But I’ve been lucky. In general the rain has been kept to a minimum and when heavy storms did strike Manila I was traveling to Cebu or Davao, conveniently avoiding the torrents of rain. However, I arrived back in Manila on Sunday and every day since I have seen rain clouds, watched streaming droplets inch down the car window and opened my rainbow umbrella before stepping out of the house. Quite frankly there are many places in the world that are experiencing drought and someone needs to tell these rain clouds to pack up and leave town. Let’s check Weather.com: 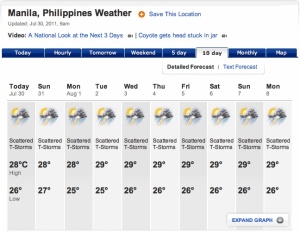 I later learned that this persistant precipitation had a name. Tropical storm Juaning hit Legazpi City, Albay area earlier this week and has already taken 41 lives. Landslides, floods, and falling trees forced many family into evacuation centers while others were trapped in their homes due to the speed of the flood level rise. The Manila Bulletin places the damage caused by the storm at P 199,400,000 or USD $4,722,092; the majority of the loss coming from damaged agricultural crops such as rice and corn. For people with so little, destruction to their livelihood is especially devastating. The storm  made international news and videos of flooding were broadcast on CNN.

By the time the storm reached Metro Manila, it was weaker and posed less of the threat. For me, it meant bringing an umbrella and sitting in near stopped traffic for two hours but for others it meant the loss of their belongings, their homes and, in some cases, their lives. A humbling thought to say the least.